The diary entries give a first hand account of many of the actions that we carried out at Greenham, court cases and time in prison.  Non-Violent Direct Action was a big thing for me at Greenham Common.  Like most of the women that was why I was there - to physically stop Cruise Missiles from becoming operational.  I was prepared to break the law and face the consequences.  However it was much more convenient when we didn't get caught, or else the police couldn't be bothered to charge us for some reason.

I tried to show my contempt for the law that protected Cruise Missiles, at the expense of Commoners' rights and Common Decency and to argue that the greater crime was to do nothing when given a chance in court.  The court system was a corrupt game.  Ultimately we would win in court showing that the trespass laws were illegal.

Usually we were not charged but still the times that we were added up and below is a picture of each charge sheet to give an idea of Who With, Where and What we got up to.  I can't remember each of these occasions - though some shine brilliantly through the fog of memory.  The plotting for weeks paid off so well with the Bus Action and getting the Queen's attention in the Buckingham Palace Action.  Other actions were very much spur of the moment, such as when I threw a paint of red paint into the back of a USAF pick up truck to stop it joining the convoy on Salisbury Plain.

Below are pictures of the charge sheets, and a few bits of related paper, that I have still got in my possession.  It gives you an idea of what we were up to.  Sorry about the poor quality of my paperwork.  Remember that they probably spent years scrunched up inside a book!

Exhibit One, below.  Criminal Record April 1987.

I thought I would start with this piece of paper which would have been produced when I was being sentenced following the date of the last conviction.  They have missed out a second criminal damage conviction from February 1986 (I got an extra seven days as I was already in prison). 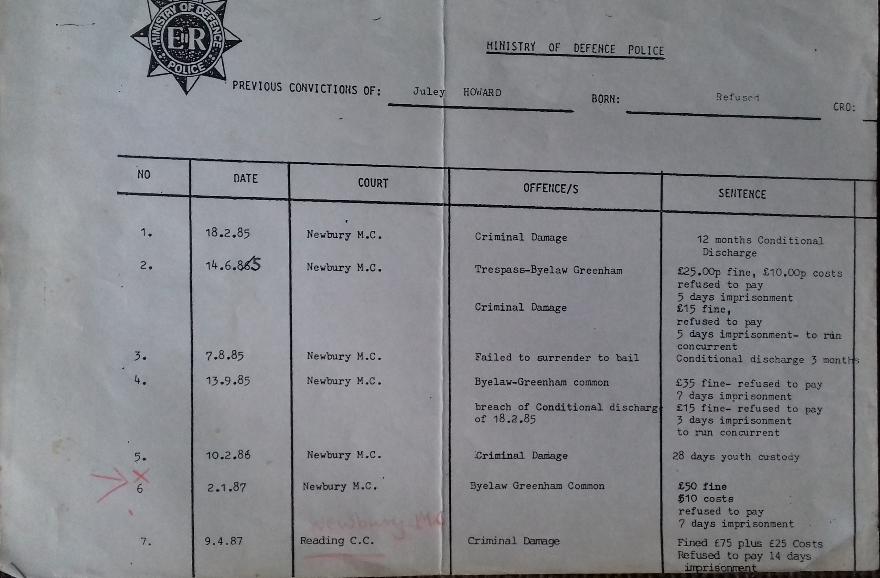 If I remember correctly this was all a terrible accident.  In the process of arresting me the nice WPC got paint transferred my my clothes onto her uniform.  In court she referred repeatedly to the USAF Cruise Missile convoy which REALLY irritated the Crown Prosecution Service who were under orders not to mention why we were there at all.  The result for me was an extra seven days in prison in February 1986.

I certainly did intend 'to destroy or damage property belonging to another' namely a vehicle belonging to the USAF.  As a result I was sent to prison for 28 days on 10th February 1986. 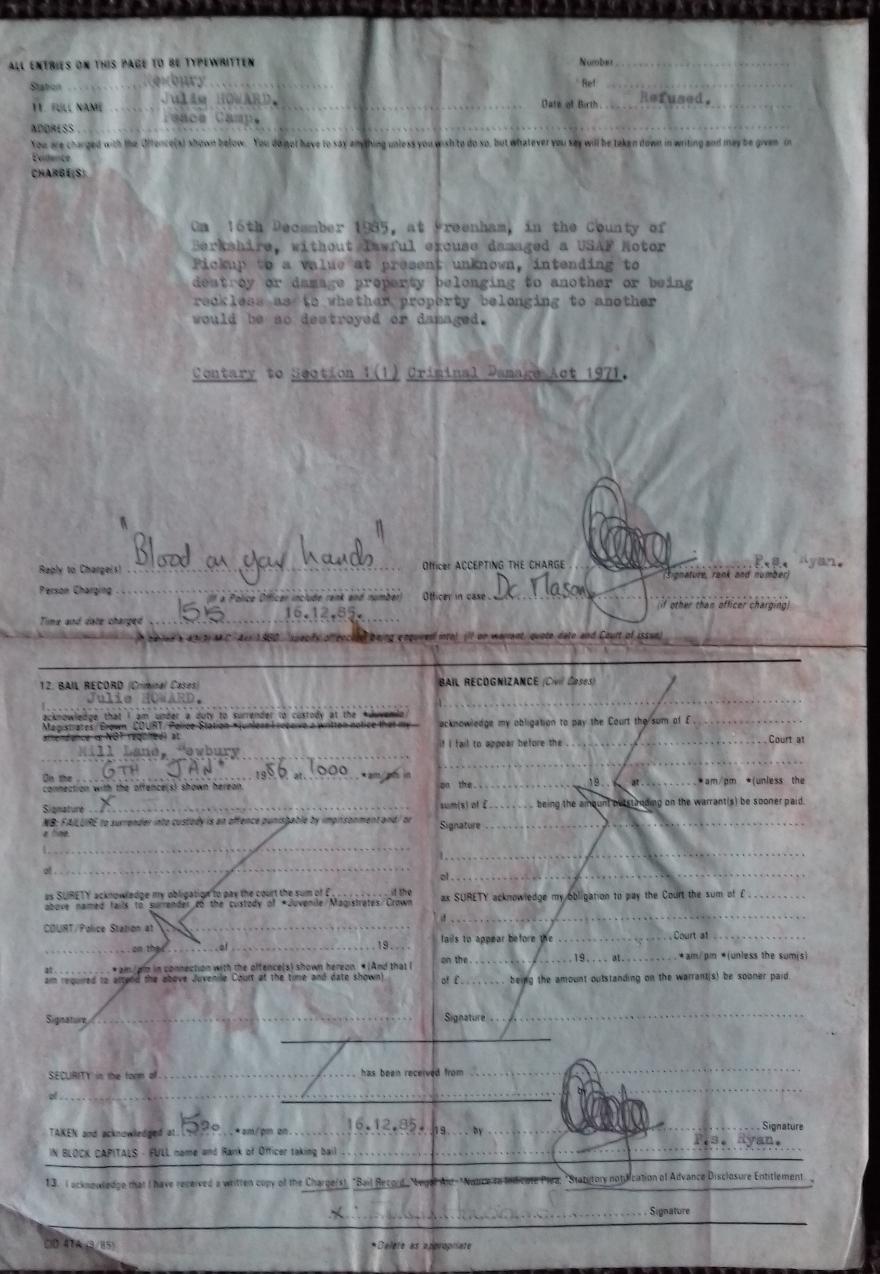 We received intelligence from a CND member in Oxford that the Americans were planning to bomb Libya for a second time that night.  We spent just over a week on remand for the relatively small amount of damage that we did to a couple of F1-11 planes.  I actually got found not guilty on appeal, despite admitting the damage, as the USAF airman's description of me was so far from the truth it seemed from the evidence that I couldn't possibly have been there despite having been arrested inside one of the planes! 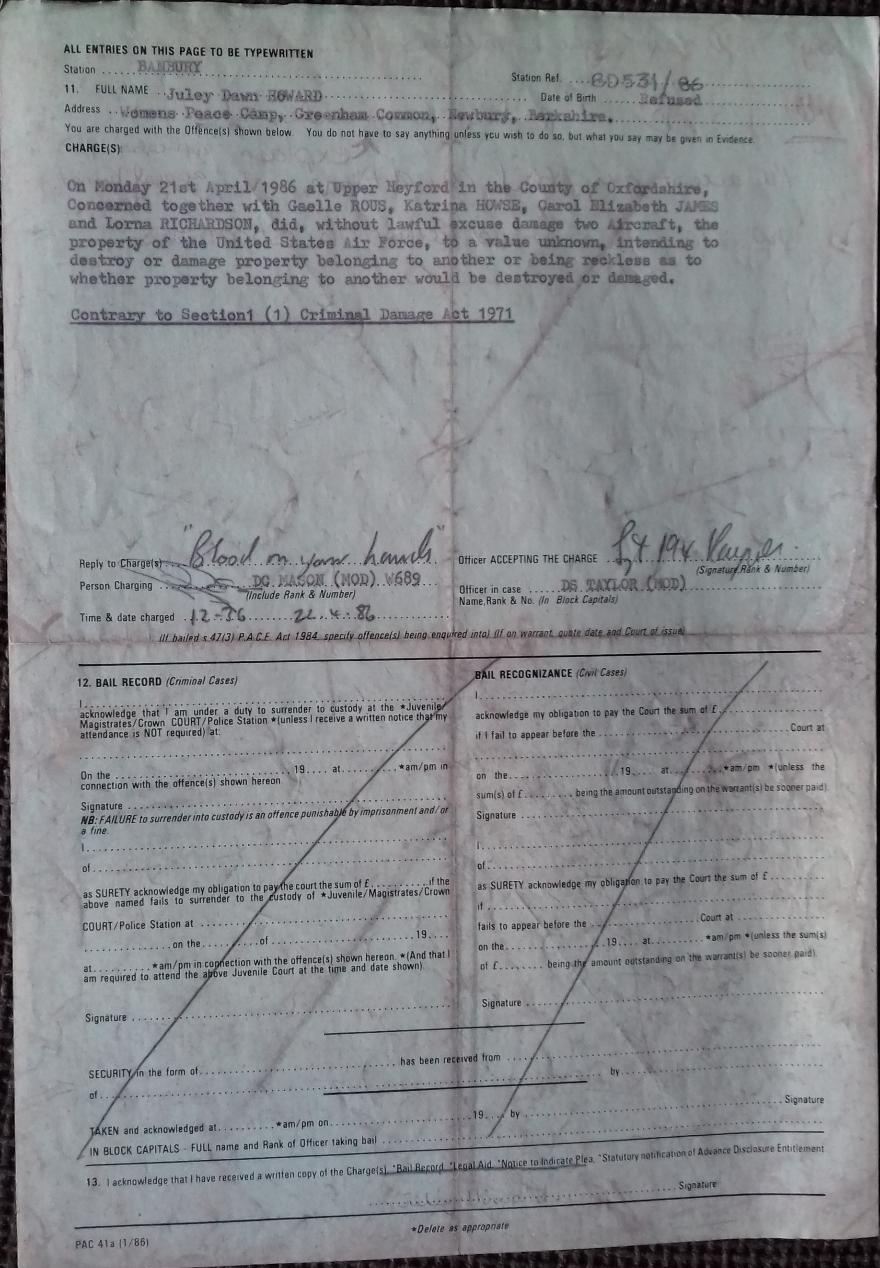 This is a simple charge of trespass.  Callum MacGregor was a MOD Police Officer, maybe a few years older than myself and often on duty at the main entrance to the base. 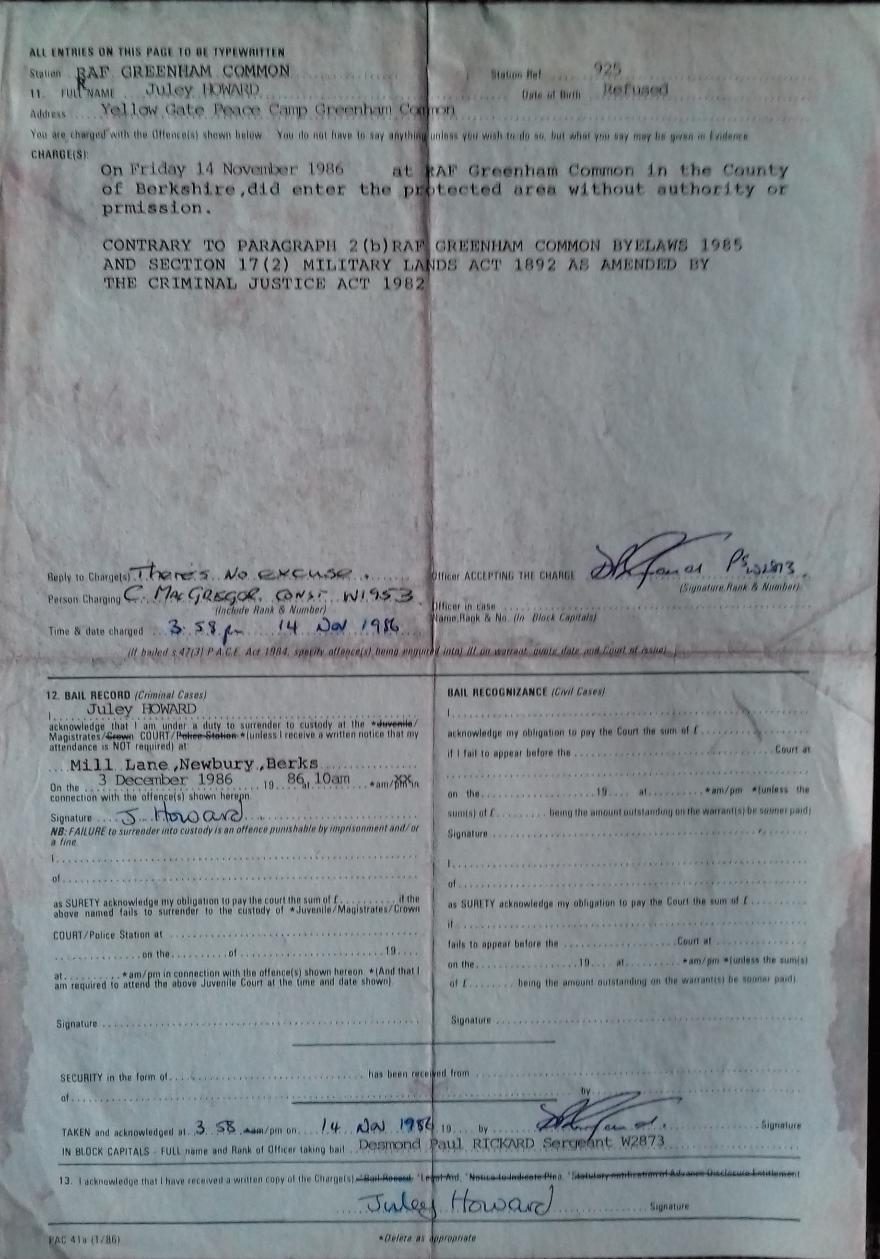 A caution rather than charge for obstruction. 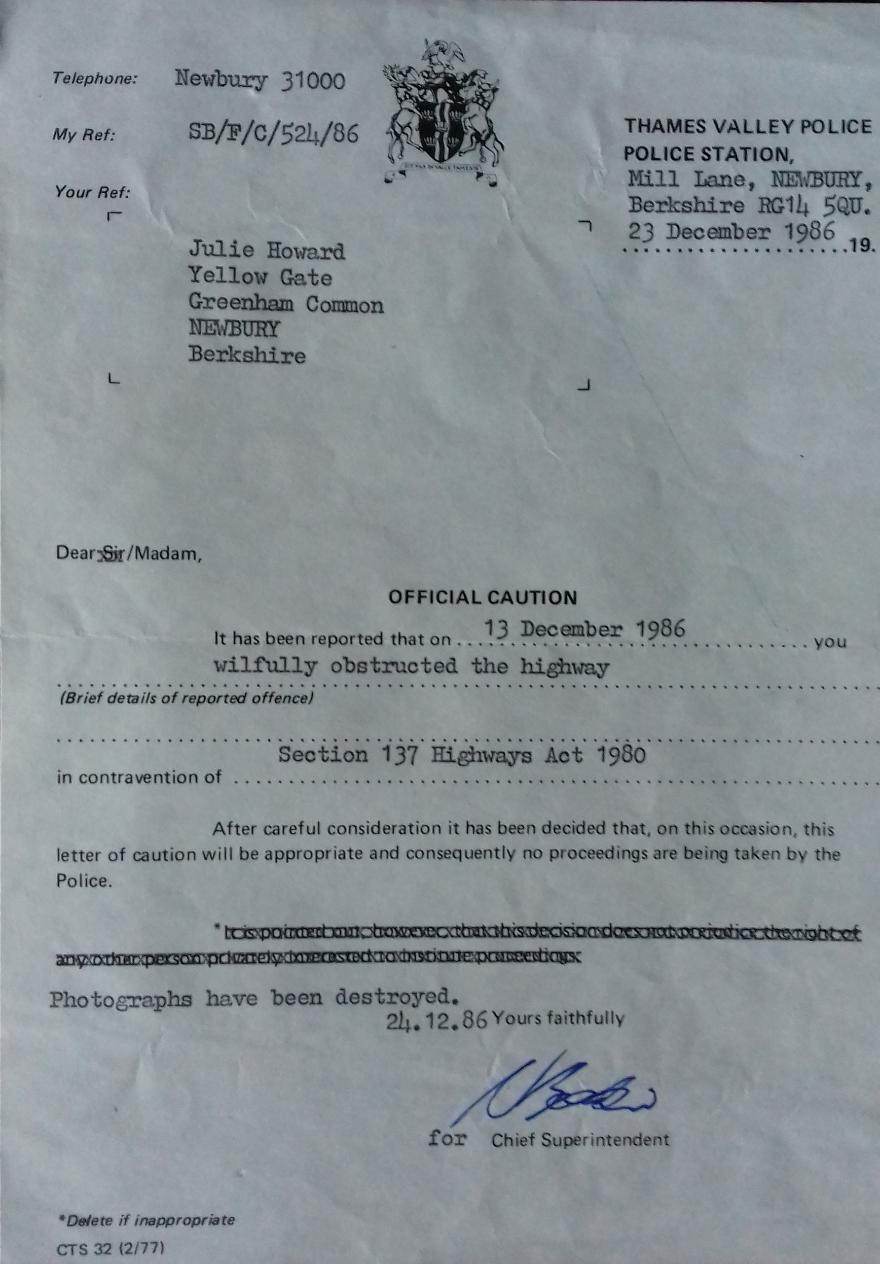 This bail notice is given under the Police and Criminal Evidence Act (PACE) 1984.  I think that although there were negative aspects to this legislation it generally benefited us at Greenham, as according to the Act the accused were entitled to advance disclosure of all evidence against them before them.  This gave you a chance to think about what you might want to ask particular witnesses in court and also generally created a mass of bureaucracy that tied the MOD in knots. 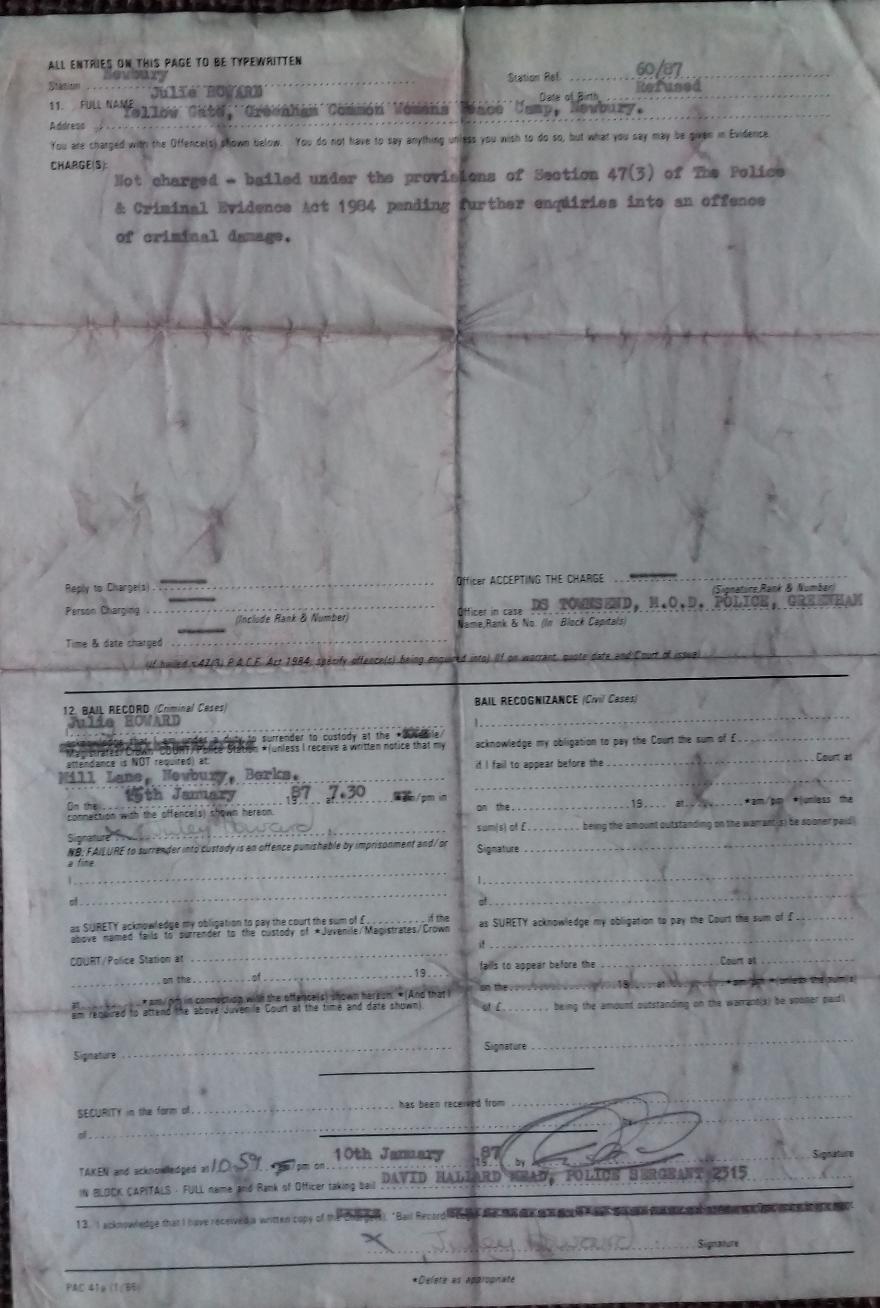 One of the long term residents of Greenham Common, Elizabeth Abrahams, owned a semi-converted chapel in Wellingborough.  While we were staying in the area we decided to break into Alconbury - a USAF base linked to the future siting of Cruise Missiles at Molesworth in Cambridgeshire. 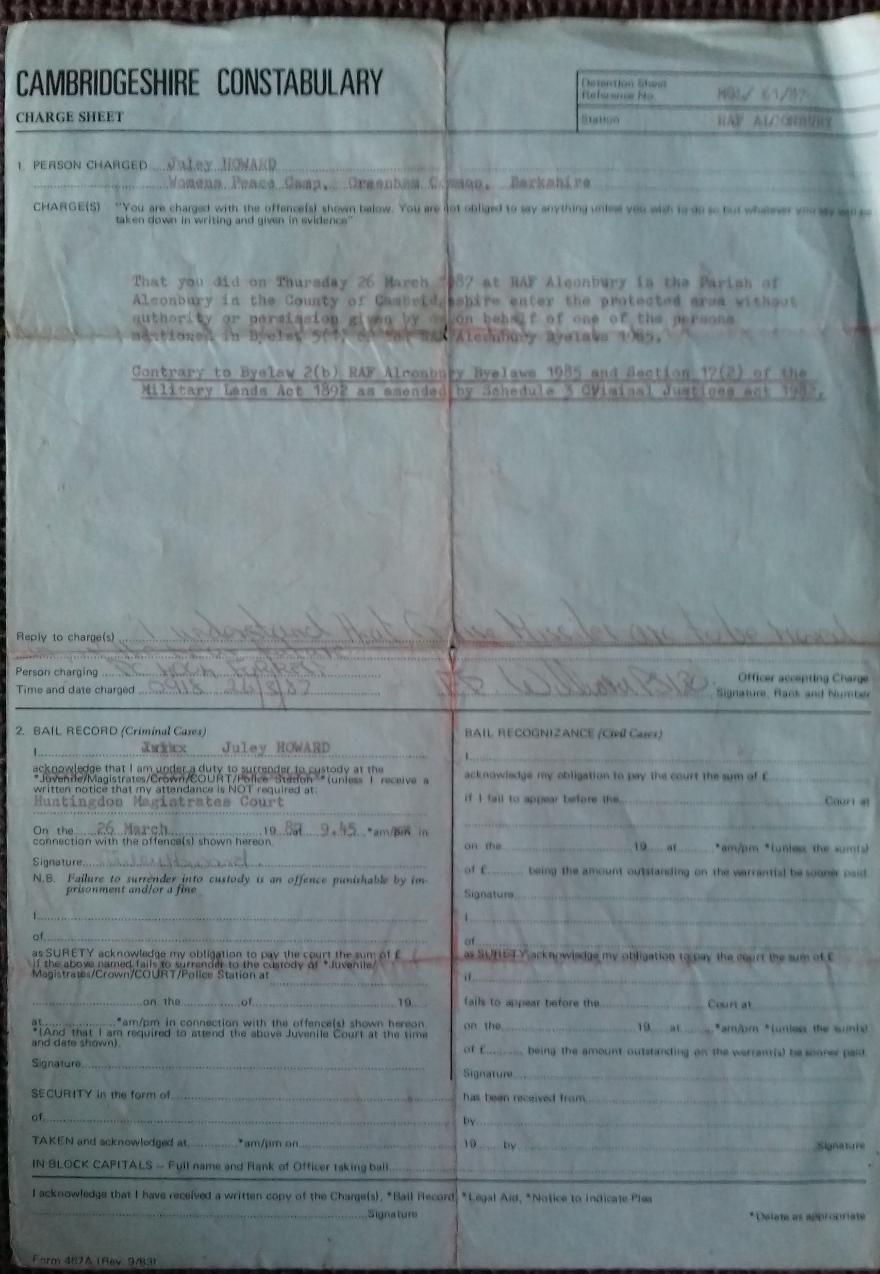 This trespass was around the time of the General Election and I had been out leafleting for the Lib Dems (they probably could have done without my support!) so the Election and the opportunity to get rid of the warmongering Margaret thatcher was uppermost in my mind.  The standard of English in the MOD police force wasn't very high. 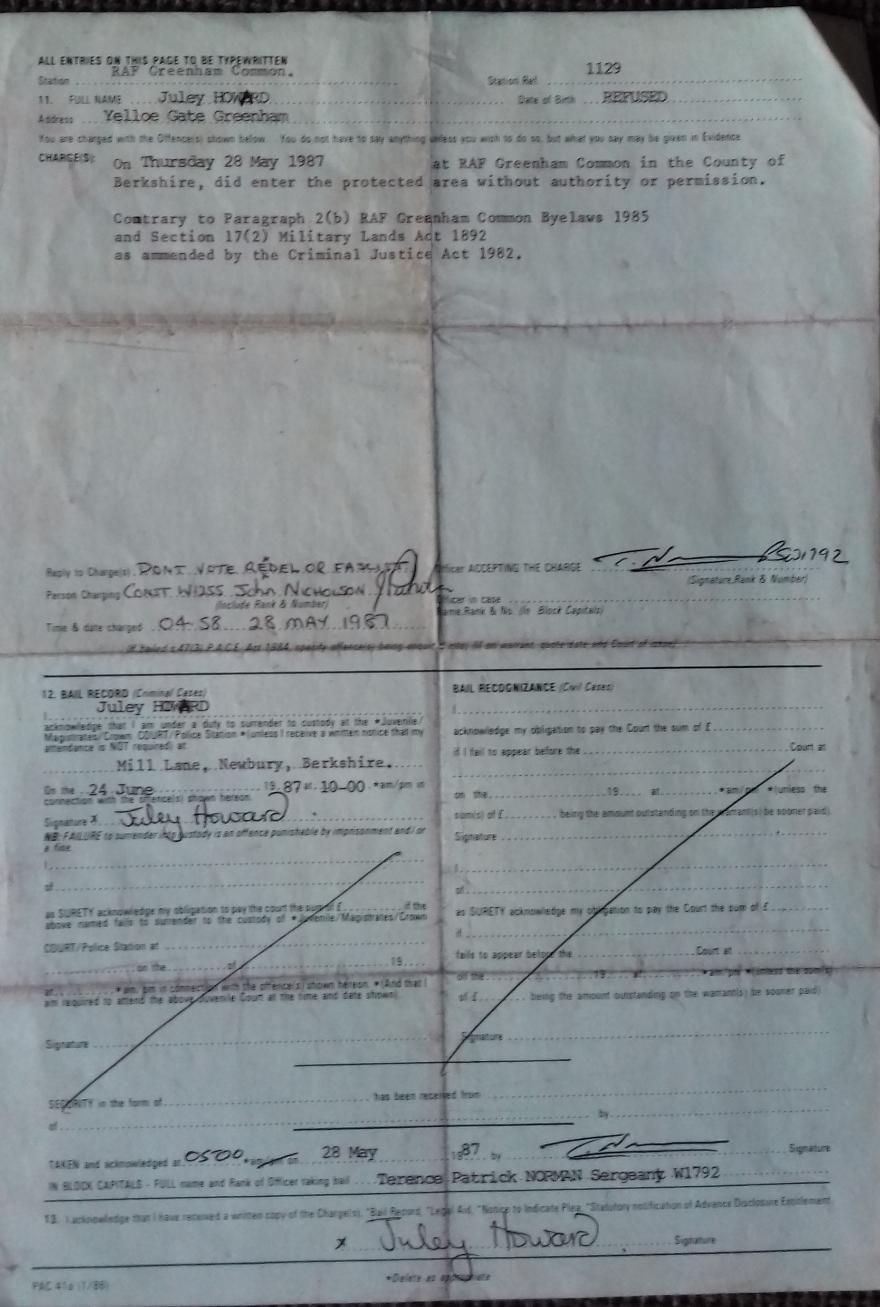 I was actually found not guilty in court for this charge.  I intervened to stop a policeman carrying a friend by her neck as she was basically being strangled and I was concerned that he would seriously hurt her.  In return he arrested me as well, with two of us under arrest he lost the ability to do either of us any more damage.  The magistrate believed my account of what happened. 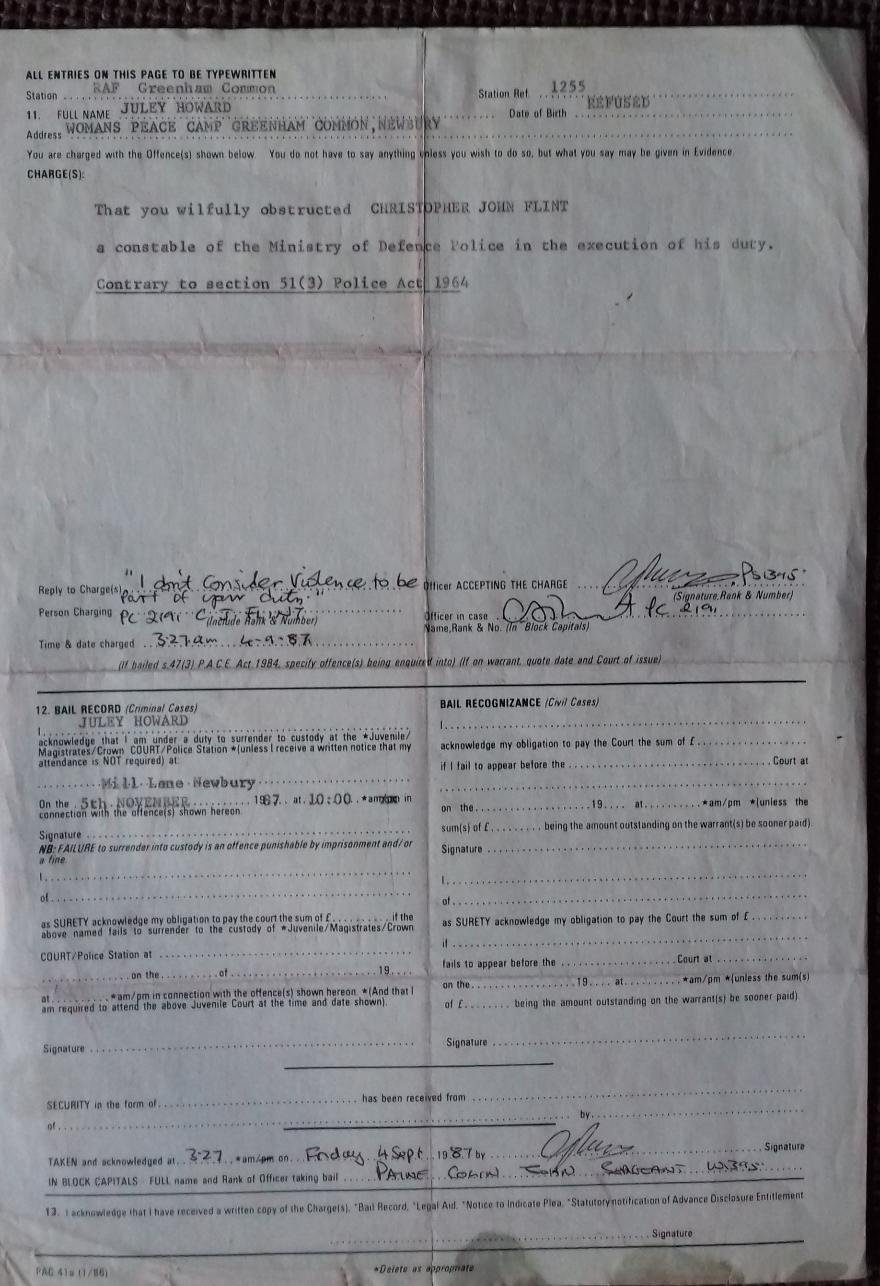 The Cruise Missile convoys were still being deployed from Greenham Common to Salisbury Plain.  This arrest was inconvenient as the resulting prison sentence interrupted my first year of university education. 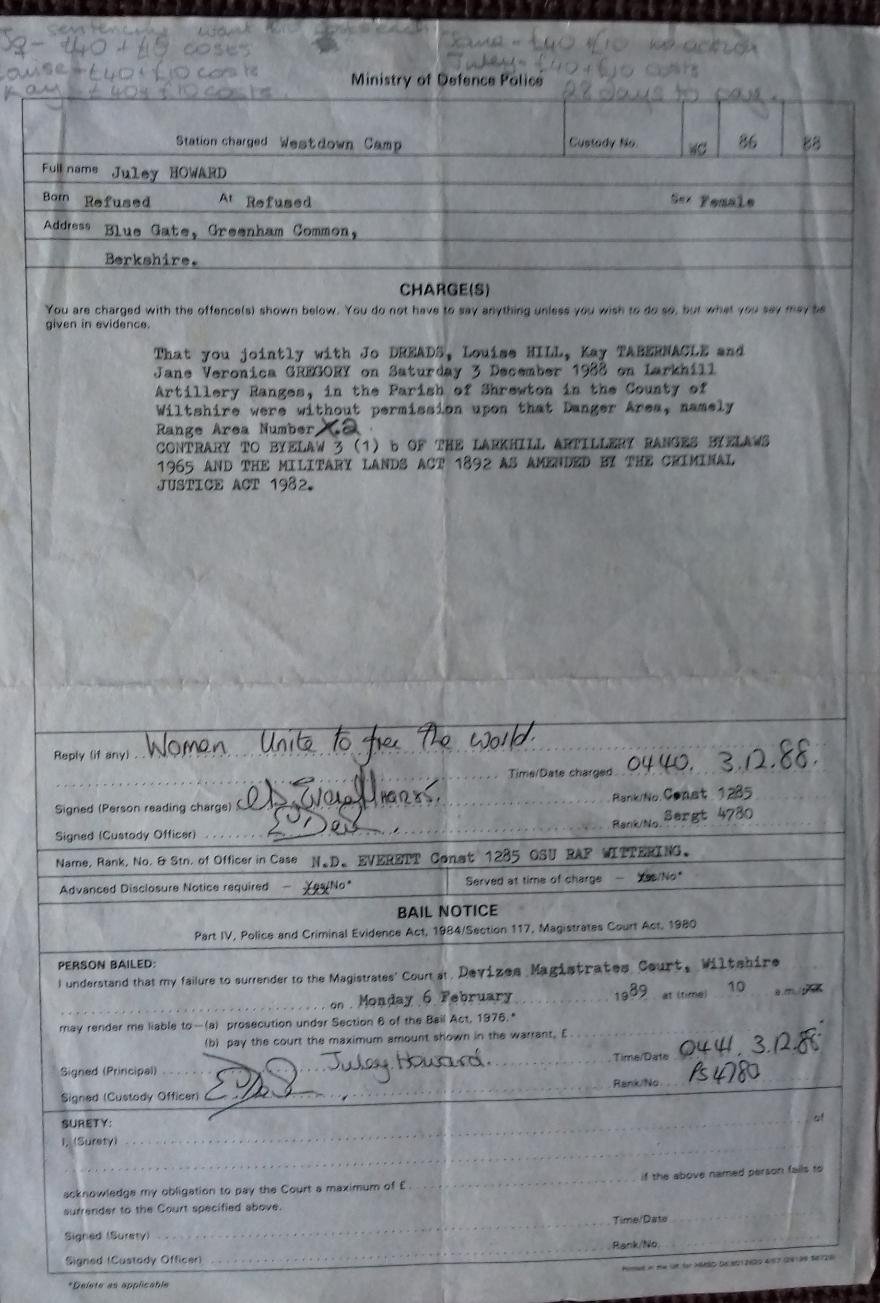 I don't think I was convicted of this.  I argued that surely after all of this time the police should be used to the protests and that their police training should have made them able to deal with us this without feeling harassed, alarmed or distressed!!! 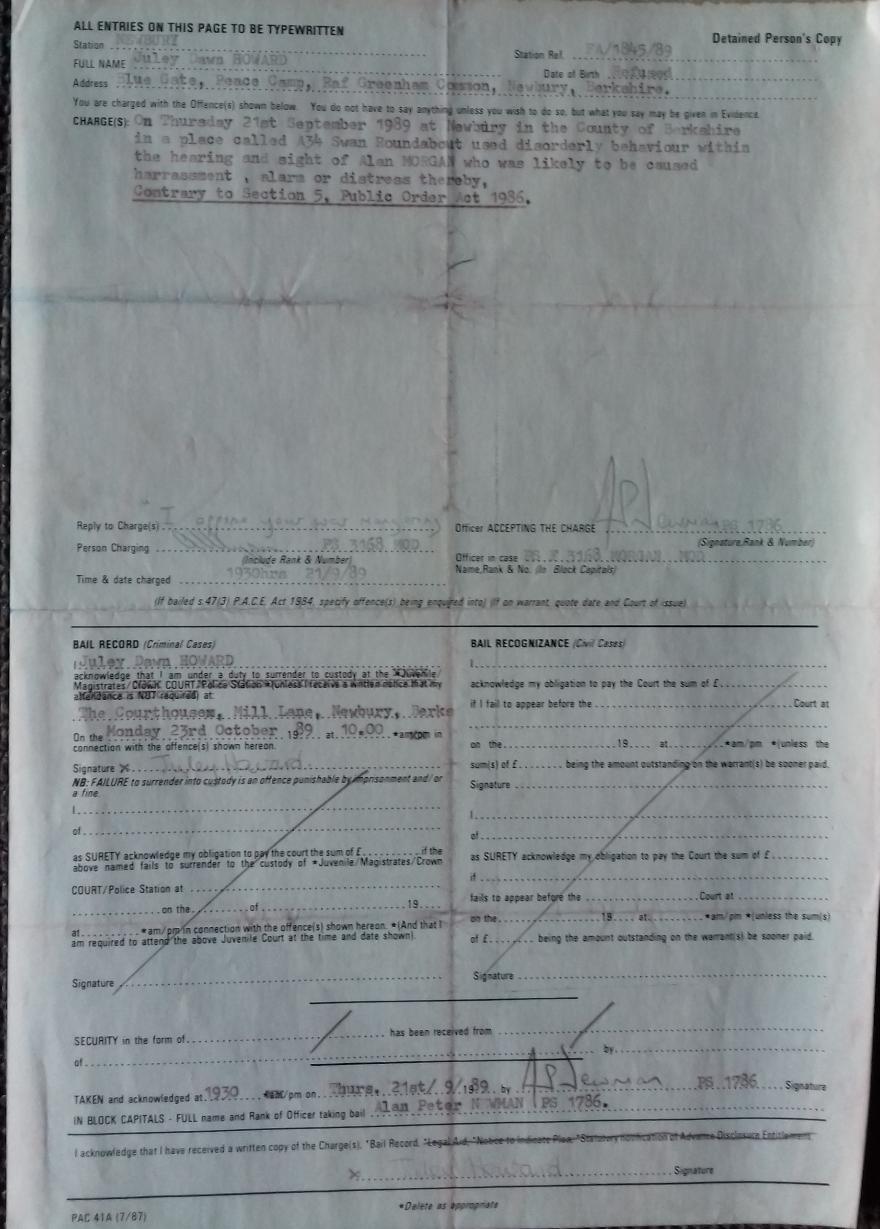 The Buckingham Palace Action is described in detail elsewhere on this website.  Follow the link from the drop down menu above. The reply to charge is hard to read in the original handwriting.  It reads: "The second charge is totally outrageous.  I was inside Buckingham Palace to ask the Queen as Head of State to recognise the Western Shoshone Nation and to stop the British government from conducting any more nuclear weapons tests on their land and apologise." 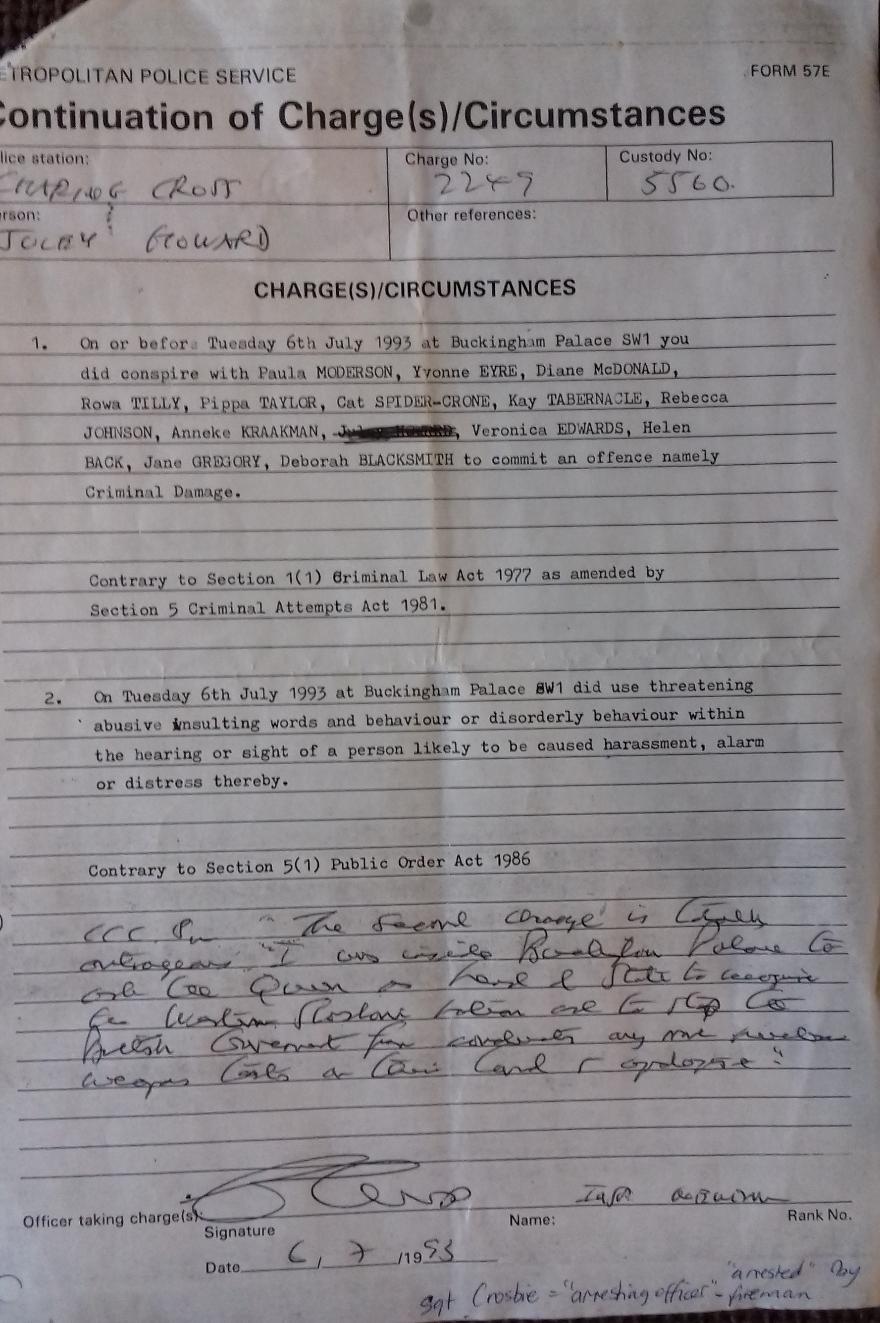