On the trail I didn’t see any bears, which had been my main concern. (You should see the leaflet about bears that the ranger gave me! It was full of useful information like ‘try climbing a tree if chased by a bear, however black bears are agile climbers’ and ‘if a bear actually attacks you there is nothing you can do, but you could try curling up to protect your neck, face and hands – this might work.’ Or statements to that effect. Unfortunately I had to use the leaflet to start my fire!)

Spinsister Vale is in Coombs about five miles away. The women there have about 14 acres with a well, creek and buildings that they’ve established themselves in the last three years. They seem quite friendly and welcoming. I’ve got the sweetest little cabin with a bed/living room and a kitchen to stay in, for just $5 a night – what a bargain!  My stuff is strewn all around in the sun. I hope that is dried out by the time I get back.

Wednesday 28th August on the boat Nantucket to Boston.

We’re sitting here on blue plastic benches, facing each other across a light blue formica table. Books, sandwiches, two throw-away coke beakers with plastic lids, ice and straws, assorted plastic bags and paper napkins between the three of us. Paper napkins fall (or are dropped) from the tables of the passengers in front of us. They don’t turn around, the paper tumbles like weeds down the aisle. I see the trees falling, cut with an axe in a damp green forest, surrounded by the undergrowth, ferns, other trees and tall springy plant growth. Then machines, big like a combine harvester, tearing at the roots of other trees, tossing them into the air, limbs ripping, moving forward, a scene of desolation left behind. A smoking battle field. I pick up the serviettes and toss them in the trash can.

Immaculate baskets, clothes, presentation, ice in their glasses, reading a new novel, glancing at my friends with their talk about AIDS coalitions, rich gay boys and job applications.

When I said that I thought that dishwashers were a waste of water and took the dirty dishes out of the dishwasher to wash them by hand when everyone except me and Patricia was out, I wasn’t being aggressive. But I didn’t say much so they remembered it and brought it up again the next day. I was thinking of Old Man River, the dam we visited with its 24 hour construction, security, sanitised viewing area a half mile away and where moths had died trapped in the display cabinet. When we parked our car the security guards shut the barrier behind us. My friend had purple hair and a leather jacket, while I look straight. I was thinking about up on the reservation, driving twenty miles to get water across thos corrugated dirt roads at 50 mph. No water on tap for bad Indians, who won’t leave their land and pay rent in prefabricated government settlements like the good Indians, defeated and starving.

Kill the people in the north to feed the dishwashers in the south. None for the bad guys with dust in their throats, in their cooking pots, between the blankets, blowing in under the door. Take the paper napkins and burn them, use the paper cups once after burning the land and working all those hours to make them, then throw them away.

I’m sitting on this ferry finding it difficult not to cry because this society is so unjust and disgusting, the way it treats the people and the land. I don’t know how I an communicate this with you over there. I could explain it logically but it isn’t logical, it’s a feeling of deep-seated pain. The same pain that makes me do crazy things at camp against the military state, that drives my anger which isn’t a point of view, or statement of political affiliation as much as an intense feeling that THIS IS NOT RIGHT. I hate ‘capitalism’ (the status quo) so much the way that the wealthy feed off the bodies of the people while remaining so clean. I want to burn down their holiday homes, make them clean up the blood, dirt, poverty, but above all I want them to see and feel what I see and feel, and start scrubbing that blood off with conviction.

The US have been due to do a nuclear bomb ‘test’ this week, so on Tuesday eight of us went and did an action at the BBC. Me, Kay and Katie managed to occupy the balcony/bridge over the front entrance, before being forcibly removed down a ladder and dragged into a van on the opposite side of the street (extremely painfully).

Jane chained herself across the doors of the main entrance – just as well as it was more difficult to climb than we thought it would be! We managed to stay up on the bridge thing for almost two hours. Jane got arrested first after about 20-30 minutes. Sal got arrested after  being warned about using the megaphone. In fact we all got arrested for the same thing - breach of the peace, but then released at 8 o’clock, without charge. I can’t believe that we were so successful! I wonder if that’s why they haven’t done the ‘test’ yet!!

I’ve been really extremely busy doing things for the Women’s Western Shoshone Tour 1992. Things are going well financially though of course we could always use more money! Heidi and Pauline should be here on 31st August – just two weeks – wow!  The only real problem is that there aren’t many rest days built into the schedule, particularly near to the end. I think that it will go really well if we get the publicity right.

The tour’s over. Bush has signed the US moratorium and Vicky got married today. She’s off to Venezuela with Steve tomorrow.   I feel quite shattered after the speaking tour but there’s still a lot of stuff to get done – solidarity actions and a conference/gathering December 5th/6th in Manchester. There’s a CCND conference before that and CND’s conference. I stupidly said that we’d do a talk for Amnesty International in Bristol on November 16th. We also need to write a report on how the tour went and I need to sort out the finances and get the accounts audited.

I had an article published in New Internationalist – although I don’t think that it was that interesting it’s good to get something in there. (About that stupid action and the Western Shoshone land rights struggle.)

Below, Pauline Esteves, one of the Western Shoshone women - herself an elder of the Timbisha Tribe enjoys a fag and a pint in a traditional British pub .  Pauline came over with Heidi Blackeye for the 1992 Speaking Tour.

On the right we found it fairly easy to climb up the side of the BBC on Whiteladies Road, Bristol to protest against another nuclear 'test' on Western Shoshone land.  I am holding the banner on the right.  June 1992. 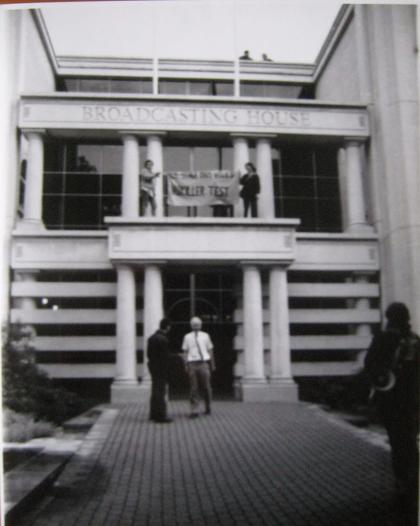