The Western Shoshone Nation is first identified on paper in the Treaty of Ruby Valley signed in 1863.  These Native Americans had lived for thousands of years as hunter-gatherers in a symbiotic relationship with the land.  The first European settlers had arrived in the 1820s trapping fur in such a way that the beavers were pushed to the point of extinction.  In the 1840s migrants passed through Western Shoshone land along the Humboldt River, devastating the land and occasionally shooting the people (Shoshone) out of fear and prejudice as they went.  The Shoshone often fought back.

Gold and silver from Nevada funded the Union side in the American Civil War.  The 1863 treaty was signed to facilitate the migrants' passage and allow for both mining and ranching.  It sets out the boundaries of the Western Shoshones' vast land.  Unlike some other treaties, in this case Native Americans and the US government both signed the treaty as Nations.  The compensation granted to the Shoshone for the use of their land was never paid.  In more recent years the US tried to wriggle out of their past and set aside millions of dollars of compensation for title to the land, but the Shoshone traditionalist worked hard to stop their impoverished people from accepting the money.  To this date the Western Shoshone have never taken the compensation, as the land is not for sale.

The twentieth century has not been good to the Western Shoshone.  More and more of their land has been encroached upon, but worse still has been the siting of the secretive Nevada Test Site in the middle of the sacred land. This has led to the ultimate in desecration, first in the form of above ground, then below ground nuclear weapons testing from 1951 until 1993.

The Western Shoshone have had so many battles to fight that it is easy to overlook their successes as they carry on their struggle to exist on the land and their struggle for both themselves and the land to be treated with respect. They saw off the planned MX missile system that would have seen a mobile cohort of Inter Continental Ballistic Missiles in Newe Segobia in the late 1970s, and fought the 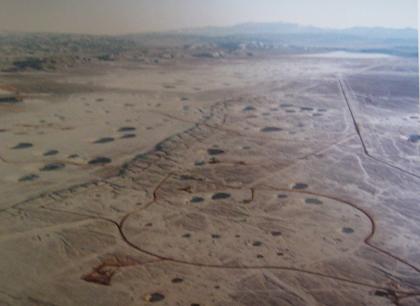 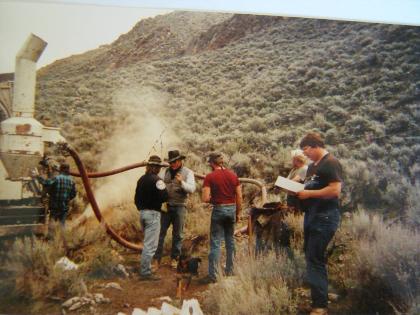 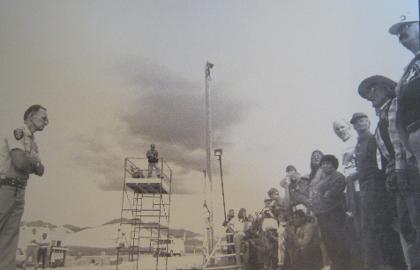 Western Shoshone face the guards at the entrance to the Nevada Test Site, 1993.

proposed Yucca Mountain Nuclear Waste repository in the 1990s. The Dann sisters won the Right Livelihood Award in 1993, despite the efforts of the US government to destroy them and drive them off the land.

From the late twentieth century, led by traditionalists such as Raymond Yowell, Pauline Esteves and Corin Harney, the Western Shoshone began to work with numerous organisations from across the US and the world.  In particular they formed an alliance with the people of Semi-Palatinsk in Kazakhstan, who successfully campaigned to stop nuclear weapons tests in their country as the Soviet Union shuddered to an end.  The Western Shoshone have had huge support from the peace and environmental movements as well as other native Nations, including individuals and campaigns such as the Big Mountain resisters from the Navajo Nation, and also including other spiritual leaders such as Thomas Banyaca of the Hopi.  Activists such as the poet John Trudell had a strong connection with the Western Shoshone.  Trudell always alleged that the fire that killed his family on the Shoshone / Paiute Duckwater Reservation had been in retaliation for his involvement in the American Indian Movement (AIM).

I feel privileged to have met and worked with some of the Western Shoshone to try to turn the tide of nuclear and environmental madness.  Their struggle is in some ways particular to their circumstances, but in other ways it is a concentration of every struggle and every form of oppression we face.